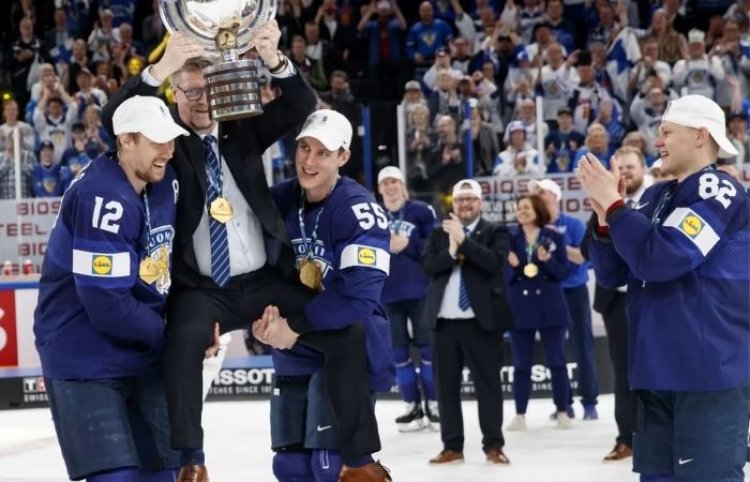 Sakari Manninen became Finland's hero, deciding the world championship with superiority. The goal was scored by Mikael Granlund, who had previously brought the Lions into the game in the final round. The solution goal was created in 66.42.

- Always the gold medal from the World Championships is an amazing achievement, then as a specialty these home competitions and all the jumps. The overtime and everything went according to the tastiest possible, Sakari Manninen said.

The dramatic final batch saw two shocking judgments. Finland first gained the upper hand when Miro Heiskanen's own racket hit him in the face. Cole Sillinger, who raised the bat, did not digest the referee's decision on the two-minute penalty.

Granlund leveled the game to 1-1 when Finland played with two men. After that, Finland quickly escaped leading the two goals.

In the final moments, Canada got a 2-3 reduction, and the judge said that Jukka Jalonen had challenged the hit. The referee had no doubts and he gave a penalty in favor of FC. However, he reversed his sentence immediately after that and went to check the situation on video. After a video inspection, the paint was approved.

At the same time, Valtteri Filppula was the first Finn to reach the Triple Gold Club, the winner of the Stanley Cup, Olympic gold, and World Cup gold.

- Of course, these have come well, but first of all, it says that I have been lucky, I have been able to be part of good teams. This is a good example of how great a gang we had. We have to enjoy this, Filppula said.

A puck worth the final

Canada and Finland offered finals-worthy hockey from the start. There was little space and time on the field and lots of ice skating and dueling situations.

Canada was ahead in these matters, and the team was able to confuse the play of the Lions with their strong bitter play. It also did not give Finland opportunities for control departures but hit hard under the end of Finland.

The best finish in the opening round was created by Canada, which got the puck from Saku Mäenalainen. However, goalkeeper Jussi Olkinuora came up and blocked Josh Anderson's shot.

In the second installment, Finland caught up better and won dueling close to the wings. The difference between the teams was seen in the superiority game when Canada’s Mathew Barzal broke the Lions ’underpower square and Dylan Cozens knocked into the top corner directly from the pass.

Finland also had places with superiority and later at the end of the round, but Canada's Chris Driedger repeatedly rejected the Lions' attempts. At the end of the batch, Jere Sallinen was the closest, but the post saved Canada from a setback.
Before that, Cozens was close to taking Canada to the lead with a 2-0 lead, but defender Atte Ohtamaa slipped sacrificially in front of the shot.

Finland came to the fore with the superiority of two men after Cole Sillinger's shocking punishment. Mikael Granlund hit that from around 35 minutes into the game.

In addition, Canadian goalkeeper Driedger was injured in the situation, so Frölunda goalkeeper Matt Tomkins was caught between the poles for the first time in the tournament.

Tomkins had only one minute and 44 seconds to score when he had to surrender for the first time. Granlund took the shot from the right side and scored the fifth goal of the tournament.

Mikael Granlund has a deflected shot on target

According to Finland, Mikael Granlund raised his goals in the battle for victory. Photo: Tomi Hänninen

Joel Armia finished the third goal, which seemed decisive for Finland, and shot it straight into the top corner from Juho Lammikko's start. The hit was the fifth for the tournament in Pori.

In the final moments, however, Canada hit the levels of the game as Barzal played two great places in front of the goal. First, Zach Whitecloud narrowed to 2-3, and then Max Comtois brought Canada to the levels.

Mikael Granlund played a big role in the match.

- That's right, yes, it's going. The final was still quite an amusement park, which lies Tykkimäki. 11 years ago the last time I got to win something, it was pretty fun, so to speak.

Sakari Manninen, who decided on the Lion's Championship, took a stand on the modest...

Brittany and Patrick Mahomes announce they are expecting their second child