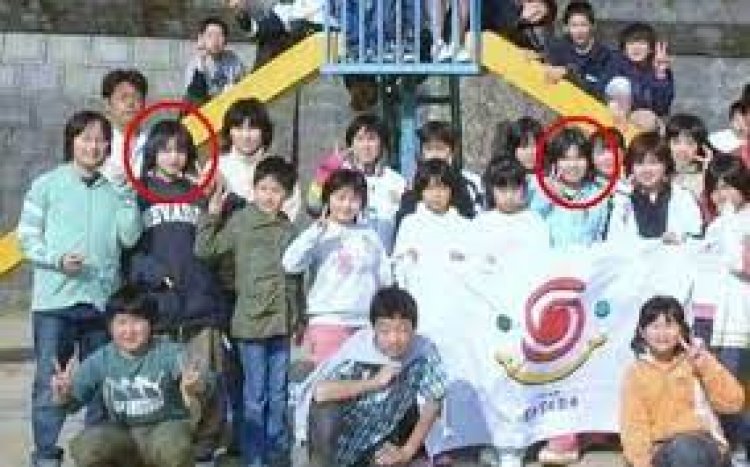 Nevada-tan is the common name for an 11-year-old Japanese schoolgirl accused of murdering her classmate Satomi Mitarai. The murder occurred on June 1, 2004, at an elementary school in Sasebo, Japan, and involved slashing Mitarai's throat and arms with a box cutter. The crime has become known as the "Sasebo Slashing." The unnamed killer has since become a cartoon character on the Internet.

The cartoon surfaced on the Internet shortly after pictures of the alleged killer were released, showing her wearing a hoodie sweatshirt with the word "NEVADA" on the chest (the suffix "-tan" is a variation of "-chan," an honorific title for children, while the sweatshirt is commonly worn by fans of the University of Nevada and its sports teams).

Her real name was not released to the press because Japanese legislation prohibits the identification of juvenile offenders, and she is officially referred to as "Girl A" in Japanese legal documents. However, members of the Japanese Internet community 2channel published her real name on June 18, 2004, based on an analysis of an image broadcast on Japanese television; Fuji Television may have done so inadvertently.

The 11-year-old student murdered her 12-year-old classmate Satomi Mitarai in an empty classroom during lunch break at Okubo Elementary School in Sasebo. "Girl A" left Mitarai's body at the scene and returned to her classroom with her blood-covered clothes. The girls' teacher, who had noticed them missing, found the body and called the police.

On September 15, 2004, a Japanese family court decided to commit "Girl A" despite her young age because of the seriousness of the crime. "Girl A" was committed to a reformatory in Tochigi Prefecture; coincidentally, the same reformatory had released the teenage murderer known (at the time) as Sakakibara six months earlier.

Analysis of "Girl A

While news reports spoke of Mitarai leaving negative comments on "Girl A's" website (specifically, that she was "heavy," i.e., overweight), which may have been the proximate motive for the murder, the investigation has shed more light on the matter. A police psychologist stated that "Girl A" was not mentally ill and had a history of violent incidents, from punching and kicking other classmates to an altercation with a knife the month before the murder.

Public speculation is that "Girl A" may be suffering from hikikomori syndrome (exhibiting some of the classic symptoms), but no forensic pathologist has yet determined this. "Girl A" also showed signs of withdrawal from social life, including leaving clubs, although she continued to play sports, particularly basketball, until shortly before the incident.

It appears that "Girl A" was heavily influenced by some more visceral aspects of Internet culture. An analysis of the case states that she was "a girl fascinated by urban legends and the Internet subculture, even going as far as guro. On her website, she had linked shocking flash movies and bizarre ASCII movies that would unsettle even the most hardened Internet warriors." Her website showcased her interests, including fanfiction about her favorite Battle Royale movie and strange "recipes" (with names like Curse of the Purple Skull and Demonic Art). A powerful influence was the horror flash video "Red Room," on which she based the website's design.

The aftermath of the "Girl A" Incident

The murder sparked an ongoing debate in Japan over whether the age of criminal responsibility, which had been lowered from 16 to 14 in 2000 due to the 1997 Sakakibara murders in Kobe, should be raised again. The case also raised questions about the extent of young children's exposure to the Internet and the impact of the Internet and the hikikomori subculture on youth in Japan.

Members of the Japanese parliament were heavily criticized for their statements following the murder, such as then Finance Minister Sadakazu Tanigaki, who claimed that slitting the throat was a "male" ver.