Four NATO warships arrived in Helsinki - "It is good that we have friends", says Minister of Defense Kaikkonen

International naval visits have only been agreed upon a few weeks ago. The visits send a strong message of support to Finland during the gray period, according to the Minister of Defense and the Chairman of the Defense Committee. 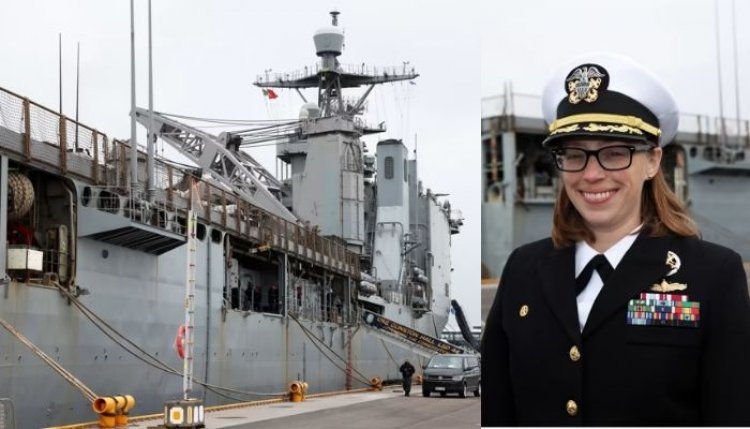 There are currently four warships from the United States, Germany, and France at Helsinki's Hernesaari pier. U.S. and German ships have participated in exercises in the Baltic Sea.

According to the Navy, interest in Finland has increased. The visits are seen as a sign of support for Finland, which has applied for NATO membership, says the Squadron Commander Jussi Jämsén from the Navy.

- Yes, we interpret it this way, and the interest in Finland has been absolutely huge. We really appreciate the fact that these ships call here in Helsinki.

- There have been exercises in different countries in the Baltic Sea. Due to the international situation, interest in Finland has increased, so the ships wanted to come here for a maintenance visit and for the crew to rest, says Commander Jussi Jämsén from the Navy. Photo: Juha Kivioja / Yle

The number of military exercises is being increased

Yesterday, the Ministry of Defense said that Finland is increasing its international military exercises. 20 new training and exercise events are planned for the rest of the year, eight of which are new.

The new exercises are part of preparations for the gray period and possible disruption of Russia between the submission of a NATO application and the approval of membership, says Minister of Defense Antti Kaikkonen (center).

- During the search for NATO membership, we will strengthen our partnerships. This is reflected, among other things, in the way we practice a little more with close partners, and other types of visits will certainly be seen in the coming months, Kaikkonen told Yle News on Saturday.

However, increasing the number of exercises is not a big change, according to Kaikkonen.

- But it is a clear sign of support for Finland, and this also contributes to strengthening Finland's defense capabilities.

Kaikkonen: In a windier situation, the value of cooperation increases

According to Kaikkonen, the naval visits had already been agreed upon before submitting the NATO application, but the movement of warships in Finnish territorial waters sends a strong message.

- It shows that we have good partnerships in the world and we are actively cooperating in defense. Of course, this has been done in the past, and in such a slightly windier situation, their value will, of course, increase further. It's good that we have friends.

- Only a few of the crew of the USS Gunston Hall have visited Finland before, so we came here to enjoy the culture, food, and museums, says the captain of the ship, Commander Elizabeth Nelson.

Orphan: A strong message in the direction of Russia as well

- This is part of a plan to ensure Finland's security during the NATO process. The exercises will increase the presence of our partner countries in Finland and the surrounding areas. That is an absolutely good thing for Finland.

Orpo also sees that the visit of warships from NATO member states to Helsinki supports Finland.

- We have received very strong signals of strong support from the United States, Britain, and many other NATO countries. They show that they are committed to Finland's security and to Finland's NATO membership.

- It is a strong political message to the outside and also to Russia that they are serious with us.

USS Gunston Hall participated in the Navy's military exercise in the Gulf of Finland last week. It will continue its journey from Helsinki on Monday. Photo: Juha Kivioja / Yle

Finland's NATO-Pokka still holds, but under the surface, Turkey is worried