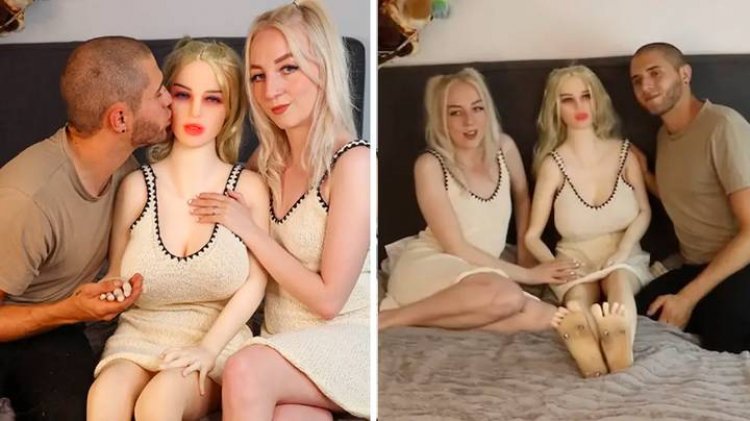 28-year-old Callum Grey and his 23-year-old partner, Char, decided to purchase a sex doll that looks like Char to help with Callum's high libido when his partner is not in the mood.

The couple were planning to experiment with having sex with other people but Char did not feel comfortable with the idea.

"It was a joint decision to buy a sex doll, but it was the best decision and has definitely improved our sex life. It's great because Callum has a high sex drive and if I'm not in the mood he's got Dee there."

The doll, which the call Dee, cost £1,500 and the couple reports that it has managed to spice up their sex life so much so that the couple decided to leave their jobs and pursue a joint career on OnlyFans.

In their sessions appearing on the plaform, Dee often shows up and has now reached 2,000 subscribers.

The couple now reports making about £70,000 a month from subscriptions and once even managed to make £10,000 in a single day.

In the past, the couple had already owned a different doll but they said that it 'just wasn't doing it' for them and thereby chose to purchase a more realistic one that resembled Char more closely.

"There were so many to choose from, but we eventually found Dee, who we think looks like me. I never get jealous because there's no emotion there - she's not real but she's definitely spiced things up. Callum has a higher sex drive than me, so it's great that he has Dee when I don't want to have sex."

The couple says that they treat their new doll as a real person, dressing it up, taking it out on car rides, and watching TV together.

"We both love experimenting with her - and she regularly joins our steamy sessions too. She's not 'just a doll' - we're really attached to her. She's helped to strengthen our relationship - and set our sex lives on fire."

[Based on reporting by: Ladbible]