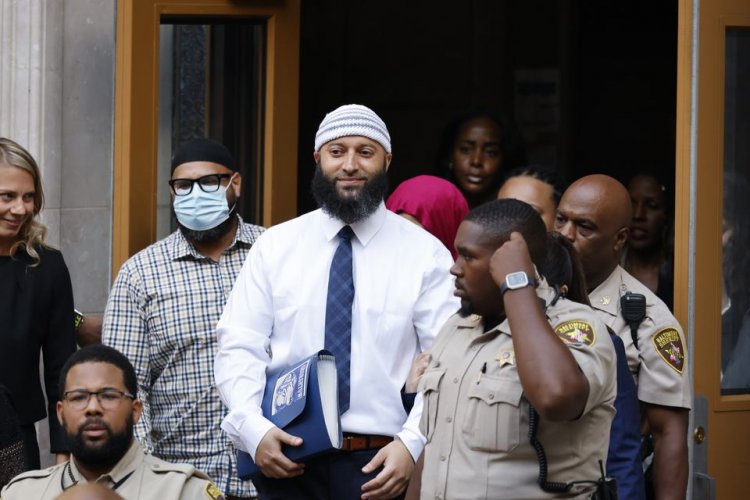 In a remarkable decision, Adnan Syed was released from prison Monday for the first time since he was a teenager. For 23 years, he had fought his conviction for the murder of his former high school girlfriend, a case described in the first season of the hit podcast "Serial."

Prosecutors have 30 days to decide whether to start a new trial or drop the charges against Syed, who must remain in custody at home until then. Prosecutors said the investigation points to two possible "alternative suspects," although those individuals have not been publicly named or charged.

"At this time, we will remove Mr. Syed's shackles," Judge Phinn said after announcing her decision. Moments later, Mr. Syed stepped onto the courthouse steps, smiling as a crowd of supporters cheered and cheered him on. He waved briefly and climbed into a waiting SUV without saying anything to the reporters who crowded around him.

Syed, 41, had been serving a life sentence after being convicted of strangling his high school classmate and former girlfriend Hae Min Lee, whose body was buried in a Baltimore park in 1999.

Syed, then 17, had steadfastly maintained his innocence, and the question of whether he had received a fair trial attracted widespread attention when "Serial" first aired in 2014. The podcast became a pop culture sensation, with 12 episodes examining in detail the case against Mr. Syed, including the idiosyncrasies of his attorney, who agreed to be disbarred in 2001 over complaints of misconduct and died in 2004.

But just this month, prosecutors recommended that his conviction be vacated and he be granted a new trial because, they said, "the state no longer has confidence in the integrity of the conviction."

In a motion filed Wednesday in Baltimore City Circuit Court, prosecutors said a nearly yearlong investigation conducted with Mr. Syed's attorney uncovered information indicating the possible involvement of two "alternative suspects," as well as key evidence that prosecutors may have withheld from Mr. Syed's attorneys in violation of their legal duty.

Prosecutors said in the motion that they do not contend that Mr. Syed is innocent. Baltimore City District Attorney Marilyn J. Mosby said Monday that prosecutors were waiting for DNA analysis that could help determine whether Mr. Syed's case would be dismissed or continued to another trial.

Becky Feldman, a prosecutor in Ms. Mosby's office, said at the hearing that the investigation "recognizes that Ms. Lee and her family were denied justice by not ensuring that the correct assailant was brought to justice."

Ms. Lee's family expressed concern that the district attorney's office had not adequately informed them of the motion to vacate the conviction. During Monday's hearing, Steve Kelly, the family's attorney, asked Judge Phinn to delay a ruling on the motion.

Judge Phinn denied the request, however, and Young Lee, Ms. Lee's brother, then attended the hearing on Zoom after Mr. Kelly called him at work.

"This is not a podcast for me," Mr. Lee said in a wavering voice as he addressed the court. "This is real life - a never-ending nightmare for over 20 years."

He said he felt "betrayed" and "blindsided" by the motion to vacate the verdict and frustrated by the many twists and turns the case has taken over the past two decades. "Every time I think it's over, it comes back," Lee said, adding, "It's killing me and my mother."

Syed's attorney, Erica J. Suter, said her client was stunned that he was released from prison after spending more than half his life behind bars.

"He said he couldn't believe it was true," Ms. Suter said at a news conference. "Today is both joyous and incredibly overwhelming."

Ms. Mosby requested that Mr. Syed's conviction be vacated as she faces federal charges that she committed perjury to obtain money from a pension fund and that she made false statements in loan applications to buy two Florida vacation homes. Those proceedings are continuing. Her attorney called the allegations a "hoax."

Mr. Syed had an on-and-off relationship with Ms. Lee when they were both students at Woodlawn High School in Baltimore County. Prosecutors had theorized that he killed her after she dated someone else in December 1998.

Prosecutors also used cell phone bill records to corroborate Mr. Wilds' testimony and show that Mr. Syed had been in the area of the park where Ms. Lee, 18, was buried.

A jury convicted Syed in 2000 of first-degree murder, robbery, kidnapping and false imprisonment. An appeals court overturned Mr. Syed's conviction in 2018, ruling that his counsel was inadequate, but Maryland's highest court reversed that decision in 2019.

Ms. Suter brought the case to Ms. Mosby's office last year after Maryland passed a law allowing people convicted of crimes as juveniles to seek a modification of their sentence after spending 20 years in prison.

The investigation identified two "alternative suspects" who may have been involved in the case together or separately and were "known persons at the time of the investigation" but were never ruled out, the DA's office said. Both had "a motive and/or propensity to commit this crime," they wrote.

Prosecutors did not release their names, and close observers of the case have speculated about who they are and whether they were mentioned on "Serial" or in the four-part HBO documentary "The Case Against Adnan Syed," which aired in 2019. (In 2020, The New York Times Company bought Serial Productions, the company behind the podcast).

Prosecutors said a document they found in their trial file indicates that one of the individuals threatened Ms. Lee in front of another person, saying he would "make her disappear" and "kill her."

Prosecutors also found another document in her trial file in which another person relayed information that "can be considered a motive for the same suspect to harm the victim," the motion states.

The evidence could have helped Mr. Syed at trial, but it was not in the defense file or in the pleadings the prosecution submitted for the defense, the motion said.

The apparent failure to turn over the files might have violated a landmark Supreme Court ruling from 1963, Brady v. Maryland, which obligates prosecutors to provide their adversaries with any evidence that could be construed as favorable to the accused, the motion stated.

In the motion, prosecutors questioned the cellphone data used to place Mr. Syed near the burial site, citing a notice on the cellphone records specifically stating that billing locations for incoming calls “would not be considered reliable information for location.” Two experts they consulted agreed with that assessment.

“Mr. Syed’s conviction rests on the evolving narrative of an incentivized, cooperating, 19-year-old co-defendant, propped up by inaccurate and misleading cellphone location data,” Ms. Suter wrote in a court motion on Wednesday, referring to Mr. Wilds. “This was so in 1999, when Mr. Syed was a 17-year-old child. It remains so today.”