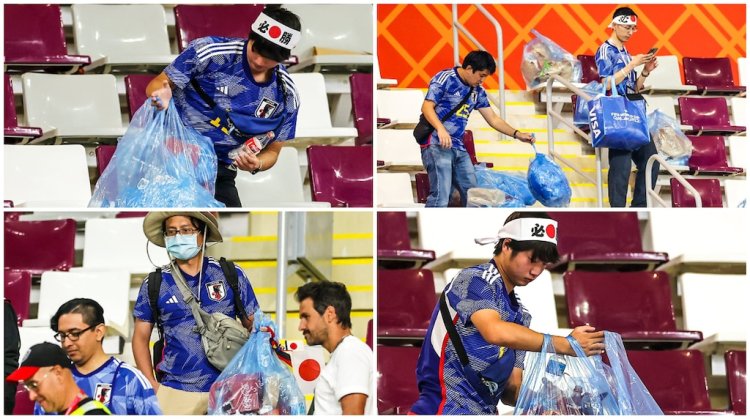 Given the magnitude of the victory over Germany, it would not have been surprising if the celebrations had lasted late into the night, but Japanese fans showed that the best manners and habits are firmly in place in any situation.

Cleaning up in the stadium after the Germany game.#BBCFootball #BBCWorldCup pic.twitter.com/TavpGQSX4N

After a game, the stands of sports stadiums are usually littered with used food trays, plastic sheets and empty drink cups, which are then cleared away by others.

But not when the Samurai Blue are in town.

No sooner had the Japanese players left the pitch after their 2-1 win over the four-time world champions than the party at Khalifa International Stadium in Qatar was interrupted by Japanese spectators cleaning up after them.

They did the same at the World Cup in Russia four years ago, notably after a 3-2 loss to Belgium in the round of 16, and at the opening match of the 2022 tournament on Sunday between hosts Qatar and Ecuador, a game in which their team was not in action.

In Japan, cleanliness is part of the culture and is drilled into us from a young age.

Scott North, a sociology professor at Osaka University, told the BBC in 2018 that cleaning is a way for the Japanese to "show their pride in their way of life."

"Cleaning up after a soccer game is an extension of the basic behaviors children are taught in school, which is to clean up the classrooms and hallways."

Japan play Costa Rica in their next Group E fixture on Sunday, followed by Spain on Thursday.

But even if they don't win the World Cup, their fans are already winners.