Various terrorist attacks on minorities have increased in Afghanistan recently. Taliban fighter on guard in front of Sikh temple after gunmen attack in Kabul on June 18, 2022 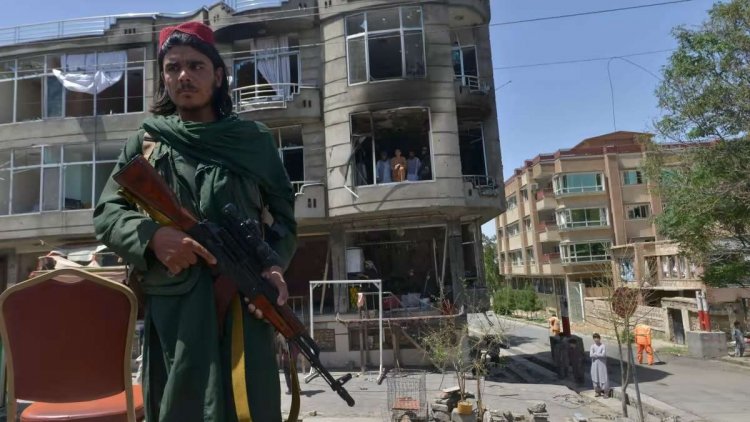 Afghanistan's Interior Ministry said several people have been killed in an attack on a Sikh temple on Saturday. One of the dead is the victim of the attack, two the assailants and one Taliban fighter.

In addition, at least seven people have been injured.

On Saturday morning, near the temple in the capital, Kabul, the sounds of explosions and shooting were heard.

According to the Interior Ministry, a gunman blew up a hand grenade in the temple. Later, a car exploded in front of the temple.

This is what Kabul looked like shortly after the attack

Sikh temple in Afghanistan is under attack this is how Taliban treats Sikhs and Hindus pic.twitter.com/myCGwBeGTB

The Taliban movement denied the blast at first

Authorities said there were 30 people in the building at the time of the explosion.

According to an official interviewed by the news agency Reuters, the Taliban movement did not initially allow the authorities to carry out rescue work at the temple.

The Taliban movement also did not initially confirm the bombings in Kabul. However, the local TV channel Tolo broadcast video footage showing gray smoke rising from the direction of the temple.

In the morning, it was reported that the Interior Ministry had confirmed that an attack had taken place in Kabul.

It is not yet known who is behind the two explosions.

The number of attacks has increased recently

When the Taliban took power in Afghanistan last August, the number of terrorist attacks dropped momentarily.

Recently, however, terrorist attacks have once again been reported across the country. Isis-K, the Afghan branch of Isis, has recently been declared the perpetrator of several terrorist attacks.

Isis-K is the enemy of the Taliban who has taken over Afghanistan. Although both are extremist movements, they have different strategies and, to some extent, religious interpretations.

The last attack on a Sikh temple was in 2020. At that time, a gunman attacked the temple and killed 25 people. In addition, eight were injured.

The Sikhs are a small religious minority group. Most of them are Muslims.

Like many other religious minorities, Sikhs have been the target of ongoing violence in Afghanistan in recent years.

Many Sikhs have fled persecution abroad.