The Air Force's new F-35 fighters are able to fly alongside unmanned aircraft. Finland may consider acquiring them in the coming years. The defense forces are conducting several surveys of drones, one of which is the American Reaper combat drone. 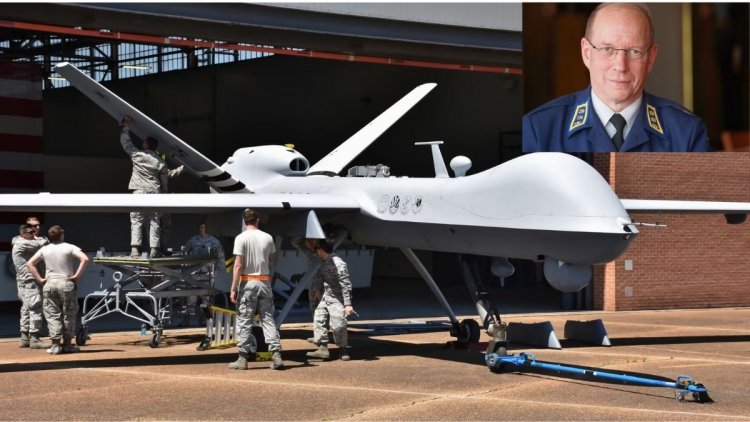 A US Air Force MQ-9 Reaper aircraft undergoing maintenance at a base in Mississippi in 2018. Photo: Michael Fitzsimmons / AOP

The war in Ukraine has further increased the interest in drones in the defense forces of different countries, including in Finland.

Maavoimat is currently testing a new drone system that will be put into use next year. Ten drone manufacturers submitted their bids in May and the final selection will be made this year, says Lieutenant Colonel Riku Rantakari from the Army Headquarters.

- The infantry project produces drones for use by all defense branches for reconnaissance, surveillance, and targeting, and they are not armed. It is possible that aircraft equipped with weapon systems will be acquired through other projects.

Armed combat aircraft are much more complex than reconnaissance aircraft. For now, it is uncertain whether they will even be acquired in Finland.

However, the consideration of fighter jets is ahead, that's how significant they were in the Ukrainian war as well.

The Dutch Oryx website, which records the equipment losses of both sides(you switch to another service)says that the Ukrainians used Turkish Bayraktar TB2 drones to destroy, among other things, six armored vehicles, five towed cannons, one rocket launcher, ten helicopters, and six naval vessels.

However, the importance of combat aircraft decreased in the last turns of the war when Russia concentrated its forces in eastern Ukraine and at the same time strengthened its air defense(you switch to another service).

Renko does not deny the importance of airplanes but reminds us of the conditions in Finland.

- The importance of drones is great in reconnaissance and combat, but when you look at which part of the world we live in, there are such phenomena as clouds, winter, and darkness, and they pretty much limit the possibilities of using drones.

The Defense Forces said last year that it had started testing the American MQ-9 Reaper system. The US has used the unmanned Reaper at least in Afghanistan, Pakistan, Yemen, and Somalia.

Media information(you switch to another service)according to the US, the cooperation of the MQ-9 Reaper and the F-35 fighter chosen for Finland would have been tried.

The MQ-9 Reaper is 11 meters long and can carry a load of up to 1700 kg. Recently, among others, the Netherlands announced(you switch to another service)that it will buy more F-35 fighters and Reaper planes.

The Air Force does not comment on the Reaper's features or testing. However, Chief of Staff Timo Herranen states by e-mail that the role of various unmanned aerial vehicles in aerial warfare is increasing and there are many different tasks. The defense forces are investigating the whole thing extensively, Herranen answers.

In the F-35, readiness to control the aircraft

The Finnish Defense Forces and the German Defense Administration continue research into the cooperation of unmanned and manned aircraft as part of the Manned-Unmanned Teaming (MUM-T) research project between the two countries. Cooperation between manned and unmanned systems can, among other things, improve the situational picture and reduce the threat to one's own troops.

Weapon systems of a completely different class are the unmanned aircraft that fly alongside the actual fighters, which the manufacturers of the manned fighters are developing at a high speed. However, none of the fighter manufacturers involved in the Finnish HX project offered them, Renko reminds.

However, they will certainly come alongside the Air Force's new fighter, the F-35, in which case Finland will also have to consider buying them.

- I don't have a crystal ball, but I wouldn't rule it out under any circumstances, says Major General of Engineers (EVP) Kari Renko.

- One key reason for updates is to generate more computing power. It makes it possible to control both a fighter and an unmanned aircraft at the same time.