Now it's scientifically proven: Dogs detect the corona virus with 92 percent confidence - even distinguish between variants

A recent study by the University of Helsinki and HUS shows that the dog can reliably identify the coronavirus. At Helsinki-Vantaa airport, the reliability of negative test results was almost 99 percent. 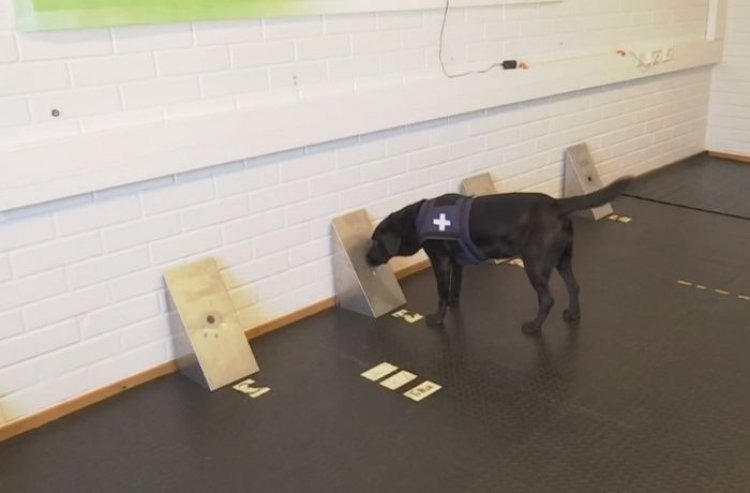 The skills of the corona dogs working at Helsinki-Vantaa Airport have now been proven and recognized, as the results of a joint study by the University of Helsinki and HUS have been approved for publication in an international scientific publication.

The study proceeded in three phases. First, dogs were taught to distinguish skin swabs given by coronavirus patients from controls found to be negative by PCR tests.

In the second phase, the four dogs included in the study, the Labrador retrievers Silja, Kosti, and Rele, and the white shepherd dog ET, passed a so-called validation test. They thus demonstrated their skills in a test set-up from which the research team was able to calculate their accuracy.

In a study design conducted according to the rules of science, none of the triplets of testers, i.e., the dog, dog handler, or researcher, knew in the experimental situation which samples were positive and which were negative.

Over a seven-day period, each dog sniffed a total of 420 samples, of which 114 were corona-positive and 306-negative. Samples were confirmed in advance by PCR assays.

Perfume dogs correctly identified 92 percent of the samples. The accuracy of official tests varies between 90 and 95 percent.

In the third stage, the dogs were able to screen the staff and passengers at Helsinki-Vantaa Airport. There, dogs correctly identified 98.7 percent of negative samples.

A closer analysis of the results of the study showed that the dogs recognized the samples of the original Wuhan wild virus excellently, but significantly less well than the virus variants. The dogs were originally trained only to recognize the wild virus.

However, they will also learn to identify variants within a few hours, and for them, dried raw food pieces will suffice.
The odors of infections caused by different variants seem to resemble each other very much but are still different from each other.

- It has certainly been a difficult decision for a dog as to whether the variant sample is positive or not. I would not have been able to think that the dog does distinguish between the different variants, but it seems, Anu Kantele, professor of infectious diseases at the University of Helsinki, is amazed.

In addition, one of the dogs became ill during the study. It slightly weakened the overall result, but still produced an important side note.

- The dog had inflammation of the salivary glands, and apparently, because of that, it didn't smell quite as accurately as normal. In other words, it is not advisable to put a dog to work when sick, says Anna Hielm-Björkman, a docent in veterinary medicine.

Almost limitless possibilities in the smell of dogs

The biggest advantage of dogs in recognizing a corona is their speed. The result is immediately ready, and a quick sniff of a passing person is enough for the dog.

According to the research team, the use of dogs in public events, for example, provides an effective and rapid way to assess the health status of the public.

- A person marked by a dog can then be referred for an official test, Anu Kantele mentions.

The University of Helsinki has long studied the possibilities offered by the sense of smell in dogs and, for example, the genetic heritage, which also helps to elucidate human diseases.

Anu Kantele and Anna Hielm-Björkman consider the research result to be significant for the credibility of smell dog work. Coron Dog Kosti smells rather than poses. Photo: Paula Tiainen / Yle

Anna Hielm-Björkman, who has studied dogs and the effects of their diet on their health, says that in addition to corona, dogs may well smell long covid or borreliosis, for example.

From different cancers, dogs could next learn to smell, for example, brain, pancreatic, or breast cancers.

- In my opinion, the training and research of dogs should focus on these diseases, which are poorly recognized by modern medicine or which would benefit from an early diagnosis.

At present, corona dogs are occasionally used on construction sites and in large private events, among other places.

The study now published, conducted strictly according to the rules of science, is also important for the credibility of the smell dog business.

In addition, dogs provide a quick way to screen virus carriers from a large crowd.

- This saves a lot of money and resources. In addition, there is a great help in managing the epidemic. Although the situation is calming down, dog training has not been wasted. Once trained, a disease-recognizing dog is very easy to retrain, Hielm-Björkman says.