The H5N1 bird flu virus is not susceptible to infecting humans, but the increase in bird infections gives the virus more opportunities to turn into a time bomb in humans as well.

0
Poultry farms have also experienced more avian influenza epidemics in recent months. Tens of millions of birds have been killed to stop the virus. This was the situation on a Danish turkey farm in January. Photo: Mads Claus Rasmussen / EPA

Since last October, there have been 2,600 outbreaks of avian influenza in wild birds worldwide, twice as many as in the previous major wave in 2016-2017. (A) A new strain of the H5N1 virus is now spreading more rapidly in wild birds than ever before.

It is typical of wild birds that they survive the symptoms of the infection and can carry the virus very far during their migration. In poultry farms that hit along the way, the infection is always fatal news. This year, more wild bird deaths have also come to light.

Scientists fear the virus is now spreading to endangered bird populations and continents where it does not yet exist. So far, South and Central America and Australia have survived.

The virus had been tried in the United States before, but it had been quickly brought under control. This year, the first outbreak was diagnosed in January in South Carolina in American aspen, and in a few months, the disease was found in more than 30 states and more than 40 bird species.

Jonathan Runstadler, a professor of infectious diseases at Tufts University, says he was surprised by the rapid spread of the virus. The disease may have come now to stay, after all, the virus has shown that it can infect birds year after year in Asia, Europe, and Africa, he weighs in on the NPR channel(switch to another service)in an interview. 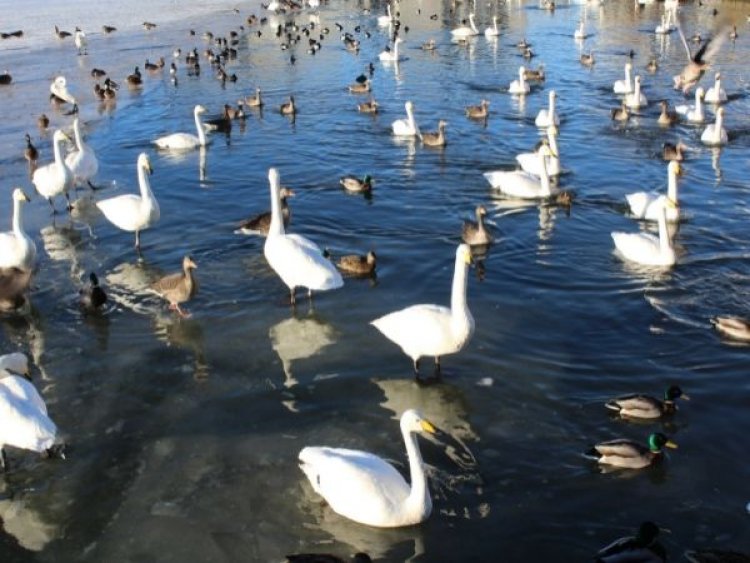 Waterfowl are particularly susceptible to carrying the bird flu virus.

The latest strain of the H5N1 virus seems to be better and better adapted to wild birds, says Andy Ramey Nature, a wildlife geneticist at the U.S. Geological Survey-in leaf.

In addition, the epidemics of recent months have hit some species harder than others. The reason is a mystery to researchers.

For example, mallards have not shown any signs of disease, although they have been found to be infected. Instead, a third of the large flock of white-fronted geese that flew from Svalbard to their wintering spot in the Scottish Solway Firth in the fall died.

There was more bad news for British ornithologists this spring. Hundreds of short-bellied geese died of bird flu in March in Cromarty Firth, Scotland. Investigators said no similar mass deaths had ever been seen in the area.

The longest beak floats in calm water in front of cloudy mountains.

The curly pelican has also been shown to be a particularly dangerous species for H5N1. Hundreds of individuals died earlier this year in Greece. This curly pelican was filmed in another spring floating at an important stage for migratory birds, the Kerkin Reservoir.

Researchers are particularly concerned about species with small populations or limited habitats - especially species that are prone to infectious diseases.

These include the indigenous trumpet cucumber for Canada and the Bering goose for Northeast Siberia and Alaska, says Ramey.

Moreover, only a small part of the deaths will come to light, so determining the true extent of the problem would require more monitoring, he adds.

Aerial view of three people wearing protective suits collecting carcasses of birds floating in the water in an inflatable boat.
Cucumbers that died from bird flu were collected in inflatables in Hula Lake in Israel in January. A quarter of the 24,000 miserable winterers in the area died. Photo: Abir Sultan / EPA

Unlike most avian influenza viruses, H5N1 also has the ability to be transmitted from birds to humans. It is not common but very dangerous: more than half of those affected die.

WHO statistics(switch to another service)According to H5N1, 836 people have been infected in the last 20 years, 456 of whom have died. The majority of the victims have been Asians living near birds, but deaths have also occurred in Europe, the Middle East, and Africa.

In the latest wave, the authorities have become aware of the infection of two people. One was a British man keeping geese in his backyard, the other an American involved in the extermination of infected poultry.

The Briton had no symptoms at all, and the American survived his illness. However, it is not possible to draw conclusions from the two people as to whether the new strain of HSN1 may be less dangerous to humans than before.

A sea eagle flies over the seashore.

One of the rare sea eagles on the Isle of Skye in Scotland also recently died of bird flu. Scientists suspect it was infected with a guinea pig egg. The population of extinct sea eagles from Britain began to be revived in the 1970s with individuals brought from Norway to Scotland. Here flies one of their descendants.

The spread of the HSN1 virus gives it more and more opportunities for change. It has pandemic potential, scientists warn.

The virus may acquire properties from mutations that could infect it from person to person. Such infections have already occurred, but the chains have been broken for a short time.

As the virus spreads to new areas, other influenza viruses will be confronted with opportunities for genetic exchange. The virus can also find intermediate hosts in animals.

- What does that mean for the evolution of the virus? We really can’t say that, says Richard Webby, an infectious disease researcher at St. Jude’s Children's Hospital in the U.S., on the NPR channel.

EU oil ban from Russia becoming partial, oil should continue to be imported by pipeline